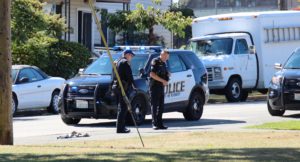 Police look over the spot where the two men were arguing. 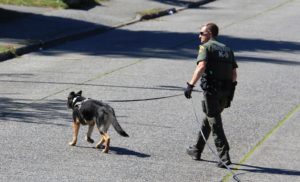 A county K-9 checked the area around Clark Park.

Everett Police School Resource Officers put two schools on alert while police looked for a man involved in an incident where a person’s finger got cut.

It happened around 12:45 this afternoon at Clark Park near 25th and Lombard. According to Aaron Snell with Everett Police, two men were arguing about a sword that was in a sheath. They both grabbed it and one man was cut on the finger.

After that happened, the other took the sword and rode off on a bicycle. Officers checked the area around the park and brought in a K-9 for a wider area search but were unable to locate the man on the bike. The man with the cut was taken to Providence Regional Medical Center to have it checked out.

While there was never any indication the person who rode off with the sword was near any schools, two area schools were notified. At the end of the day the school district sent out an email to parents about what had happened over at the park. 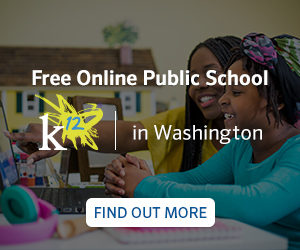