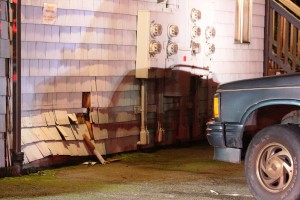 The SUV that hit the apartment was impounded by Everett Police 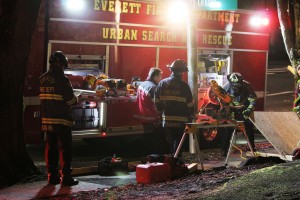 Everett’s Technical Rescue Rig known as TR1 is equipped with a wide variety of tools. 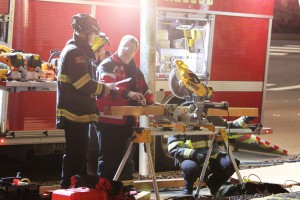 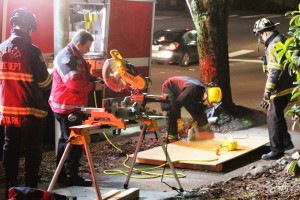 Crews work on a vertical shore to put inside the apartment to keep the building safe.

After an SUV ran into the side of an apartment Friday night, Everett Fire crews showed some pretty impressive carpentry skills.

Around 7:30 PM police and fire units were called to a report of a vehicle into a building in the 2600 block of Rucker in downtown Everett.

While there were no major injuries the crash knocked several studs loose and seriously damaged the inside one of the apartments.

Everett’s Technical Rescue Rig was summoned and firefighters used tools and lumber carried on the rig for such occasions to build what they called a vertical shore to keep the building safe until construction workers could make formal repairs.

There was no dollar estimate available for the damage done by the crash.

Everett Police are investigating the cause of the crash and impounded the SUV.

Here are a few pictures of the scene taken by MyEverettNews.com.